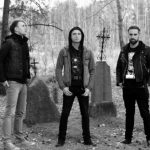 THE DEAD GOATS “Don’t Go in the Tomb” [digipack]

After critically acclaimed debut album, miniLP, demo and splits, The Dead Goats strike back with another piece! “Don’t go in the tomb” consists of three new compositions in the vein of old-school Swedish death metal – a style so characteristic for The Dead Goats. Once again they confirm being the spiritual successors of Nihilist, Grave and Entombed. Produced by Satanic Audio (Thaw, Eerie).

You may listen HERE

Previous
Back to shop
Next